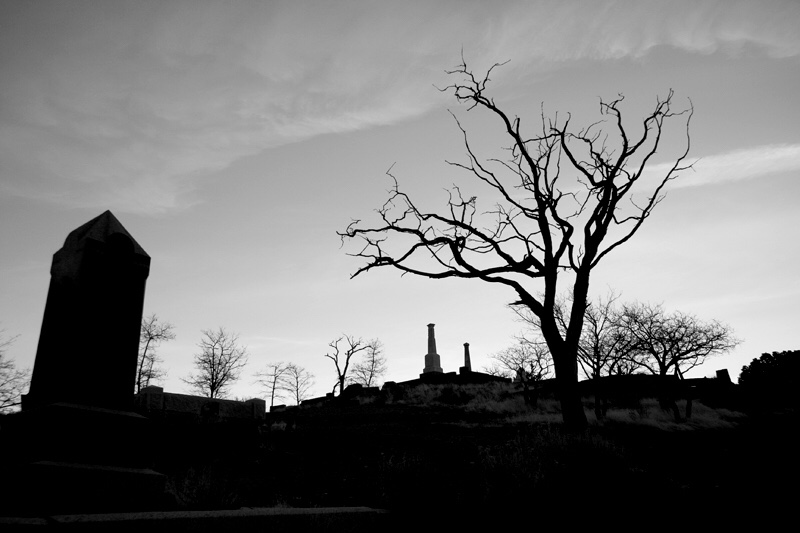 Willard Moore always stood at the side of the cemetery during a funeral. That way he could watch those who came to pay tribute to someone he didn’t know and not have to actually interact with them. Today was no different. Another group of grieving people slowly departed the recently departed. To Willard grief was always the same; tears, crying, and the occasional dramatic outburst of loss that propelled one to leap onto the casket. Willard snorted. Casket was such a politically correct term. He preferred the word coffin. It seemed more manly to him. Coffin carried with it a Wild West impression.

Willard clutched his shovel, giving it the occasional spin. As the resident gravedigger and proprietor of the oldest cemetery in the county it was his job to make the hole neat and tidy. He took great pains to ensure the dimensions of the grave were perfect. Not that anyone else would care. He didn’t care if others didn’t care. He felt there was a certain reciprocal logic in the mutual un-caringness. Willard watched the last of the group leave and trudged over to the grave. He threw off the tarp covering the dirt and sunk his shovel into the earth. He liked the physical activity of shovelling. He could lose himself in the motions of it. It became meditation to him.

In no time the grave was filled. The monument would come later. Monument was another whitewashing term in the funeral business. Willard preferred tombstone, again for Wild West continuity. He walked along the rows of graves, noting the more ostentatious tombstones. He chuckled every time he walked by one in particular. It contained a large engraved picture of the grave’s occupant. He paused in front of it. The picture was perhaps the least flattering portrait of one Thomas Tabberd; it showed him wiping his nose. Perhaps Thomas’ wife hated him, mused Willard. Thomas’ drooping, half lidded eyes made him appear as if he was going to sneeze. Either that or he was high on cocaine and was covering a nosebleed.

Willard carried on, making his way to his house. He knew he’d have a hard time selling his home, being as it was in the middle of a cemetery. But, the cemetery was his business. When he converted half his father’s farmland to the Pristine Paradise Cemetery people thought him crazy. He laughed as he stepped onto the veranda and sat down on the rocking chair. He charged a decent rate, banking half and paying himself half. He needed lawyers and accountants to set up the company and endowment; necessary evils. The endowment would continue to pay him to maintain the property even when he’d put the no vacancy sign on the cemetery gates. He had it all planned out.

Willard took in a deep breath of autumn air and leaned back in the rocking chair. His gaze fell onto the newly completed building across the road. He clenched his jaw and spat onto the veranda. He watched a family get out of a car, which had parked in the parking lot beside the building. They disappeared into the front entrance.

“Damned new wave bastards,” Willard snapped. He had fought the zoning law change that allowed the crematorium to be built. The county councillors in their wisdom thought having a crematorium by the cemetery made perfect sense as anywhere else they encountered a lot of NIMBYism. After a few minutes the family exited the crematorium and Willard saw the owner come out and see them off. The owner turned toward the cemetery, saw Willard and waved. Willard promptly raised his hand as if to wave, then stuck up his middle finger. He held it up long after the owner disappeared into the building. Willard hated his brother for turning the other half of the family farm into a crematorium that directly competed with Pristine Paradise.

“I’m not competing with you, Willard,” his brother Wallis said one morning the previous year. He picked lint off his white cardigan sweater. “I’m offering a product to people who are concerned about our planet.” Wallis’ smirk was enough to make Willard want to punch him in the mouth. Whenever his brother talked the large, bulbous Adam’s apple bobbed up and down, like some kind of skin covered yo-yo. How Willard wanted to karate chop it. His brother, unaware of the hatred his neck caused, continued. “People can choose to be cremated or have a green burial. Have a tree grow from their body, so wholesome.”

“When did you give a shit about wholesome?” Willard whined. He looked his brother over with brown eyes slightly too small and slightly too close together. Wallis’ white sweater and khaki pants and loafers made Willard want to throw dirt at him. It was as stark a contrast to Willard’s black overalls as you could find. “You used to stuff people’s mailboxes with cow shit. When they went to open the mailbox it triggered a firecracker to explode, covering them in crap. If you could set it on fire you’d be in heaven.”

“I’m using my love of fire to help others. Besides, a man can grow up,” Wallis said. He looked at Willard through brown eyes slightly too large and slightly too far apart. Then after a frown and a shake of his head. “Well, most men grow up.”

“Anyway, I don’t see why you’re complaining. You don’t offer either of my options.”

“Goddamn right I don’t. Offering the option of having worms wriggling through skulls,” Willard said. “Disgusting.” Willard wagged a finger, inches from Wallis’ face. “You have viewing parties for the cremation, too. That’s unholy.”

“You are a bastard,” Willard retorted. It was an attempt to goad his older brother who was born when their parents had not yet married.

“Oh, little brother,” Wallis said with a light chuckle and a shake of his head. “Don’t worry if no one wants to get buried with their body filled with formaldehyde anymore. If you’re concerned about employment I’ll always have a position for you.”

“I’ve got a position for you,” Willard yelled and promptly, forcefully gestured to his groin with both hands. In his frantic urge to demean his brother he accidentally sacked himself in the groin. The pain from his brother’s laugh almost superseded the pain snaking it’s way into his stomach.

Willard stood up from the chair on the veranda, a fresh wave of heat emanated from his core at the embarrassment the memory brought. Wallis had sent him a greeting card, hoping a speedy recovery from his injury. “That bastard.”

Ever since the crematorium opened Willard had seen some cancellations of plots, which required the worst thing he could possibly think of as a business owner; refunds. He had seen those same people who cancelled their plots visit the crematorium. They covered their faces and raced in, trying to hide, entering after dark. It was no use. He had purchased a high-res security camera system and pointed at the enemy building 24 hours a day. He even splurged and got the enhanced night camera capture system. He reviewed the feed early every morning. Nothing was going to get by him.

All this to say that Willard Moore was not a happy man. Even digging in the dirt did little to assuage the growing anger in his head. The final straw came when he saw ads for the crematorium in the local newspaper. The ad read in full “When you die do you want to be a part of the earth or do you want to be a formaldehyde zombie? Go green and preserve our pristine, pristine environment. Wallis’s Crematorium. ‘You Pick the Tree You Want to Be!’”

“This means war,” Willard said in a rage scream over his eggs at his kitchen table. After three minutes of screaming, Willard resumed eating. He chewed thoughtfully, not really thinking about anything other than ensuring he didn’t bite his tongue. He always bit his tongue when he ate with an anger that bubbled up through his soul. Which, lately, was often.

Willard stood up from the table, carefully washed his dishes and then drove into town in his beat-up 1979 Ford pickup. As he drove past the crematorium he stuck his hand out and flipped the finger. It was his salute every time he drove by, even in the coldest of winter nights when his hand froze. When Willard committed to something it was with the vigour of a drunken 20 year old exuberantly deciding to get a tattoo. Accompanied, of course, with all the careful deliberations such an act entailed. And, just like that 20 year old he always came to regret his actions later in the light of sobriety. That’s tomorrow’s problem, he thought to himself.

In town he entered Marvin’s Diner and Spa, a unique weed induced thought experiment that somehow came to exist. Marvin’s diner was losing money, so in order to save his business Marvin thought that people would eat while getting their nails done at the same time. Naturally, he could charge them double. He had signs made and presto; he was now failing at twice the pace he was before. This meant that Marvin was on edge, trying to cut costs on everything. From watering down the mustard to using dollar store glue to affix fake nails, Marvin constantly tried to reduce his expenses. “What you need to do is advertise, Willard,” Marvin said while cleaning straws in the sink.

“Something you’d never do,” Willard retorted as he declined a straw for his coke.

“I have word of mouth,” Marvin said haughtily, putting the straws on a drying rack out of sight from customers. “A smart marketing campaign, with a neato tag line will do the trick.” If something was ‘neato’ it meant Marvin thought it was a sure fire success. Much like his diner and spa combination.

“Like what kind of tag line,” Willard asked, noticing for the first time the residue of lipstick on the outside of his coke glass. He shrugged and took a sip.

“I don’t know,” Marvin said as he took out a wad of McDonald’s napkins and restocked his napkin holders. He frowned, causing his huge blond, bushy eyebrows to merge into one giant brow over deep blue eyes. “Do a twofer.” Marvin nodded.

“50% of marriages do end in divorce,” Marvin said with a knowing nod. 100% of his four marriages had ended in divorce. Finally, something he was better at than the rest of the general population. “Just put in a no refunds clause.”

“You are a genius,” Willard said.

“I think you mean genus.” Marvin corrected, not really caring.

Willard left the Diner and Spa with a new spring in his step. A completely unfounded, undeserved feeling of euphoria crept through his bowels like a fresh surge of diarrhea. Willard knew he was on to something. He got into the ‘79 ford and raced back to his home, thrusting his hand out as he passed the crematorium. “You’ll get yours, Wallis.”

To celebrate Willard drank of few shots of his favourite whiskey. Then curled up on his couch and fell asleep with a warm feeling in his chest. He completely forgot about his plans. At least for that evening all was right with the world.

The Next Chapter of Wallis and Willard

Photo by Robert Montgomery from FreeImages

7 thoughts on “Wallis and Willard 1: A Grave Time for A Cemetery”

This site uses Akismet to reduce spam. Learn how your comment data is processed.